It's not the blood test I was hoping for, but it's not bad. Two conditions that can affect Cavalier King Charles Spaniels are episodic falling syndrome and curly coat/dry eye syndrome. A test developed at the Animal Health Trust in the United Kingdom will identify carriers of both conditions.

Neither condition is common in the breed, but EFS, which typically begins during puppyhood, can be distressing to owners and dogs, and the curly coat/dry eye condition is painful and untreatable, which means most dogs diagnosed with it are euthanized, according to Cavalier breeder Stephanie Abraham, in her breed column for the AKC Gazette.

Does that mean that dogs identified as carriers should never be bred? Not necessarily, according to my interview with Tufts geneticist and veterinarian Jerold Bell. He says the ability to identify undesirable genes in particular dogs is good news, but it can be misused, leading to unwarranted culling and restriction of a breed's gene pool by reducing the incidence of one disease and increasing the incidence of another by repeated use of males known to be clear of the gene that causes the first condition. 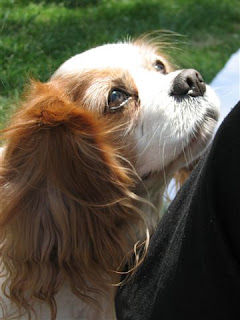 That creates bottlenecks and decreases diversity by eliminating all carriers of a gene from the breeding pool instead of breeding and replacing them.

"When entire lines of dogs are eliminated to attempt to control a genetic disease, the gene pool shifts in different directions due to the increased influence of other dogs and family lines. This is not a rare situation in dog breeding, as only a small percentage of dogs in each generation are ever used for breeding to create the next generation. Depending on the genetic background difference between the population and the breeding dogs, gene pools continually shift and gene frequencies change."

"As each breeder tests and replaces carrier animals with normal-testing animals, the problem for the breed as a whole diminishes."

The more serious concern in Cavaliers, of course, is the more complexly inherited and so far untestable diseases: mitral valve disease (aka chronic valvular disease) and syringomyelia. Not every Cavalier with MVD or syringo is affected to the same degree and only phenotypic tests (auscultation or MRI) are currently available to identify affected dogs, but knowing the affected or normal status of a breeding dog's full siblings can help breeders perform relative risk analysis. Dogs whose siblings are normal and whose parents' siblings are normal have the best chance of carrying a low genetic load for this type of polygenic condition.

Open health registries such as the Orthopedic Foundation for Animals and the Canine Health Information Center are the only ways that breeders are going to be able to find that type of information and use it effectively. Breeders who don't or won't list test results in open health registries should be shunned. In this case, it's fair to say that they are guilty--of having dogs that are affected or carriers--until proven innocent.
Posted by Kim Campbell Thornton at 12:11 PM

Kim Campbell Thornton
I've been writing about cat and dog care for more than 25 years, first at Fancy Publications (now Bowtie), where I was editor of Dog Fancy for eight years, and then as a freelance writer. My most recent book is Careers With Dogs, and my work has been published in many pet magazines, from Cat Fancy and Catnip to Dog World and Your Dog. I wrote a monthly pet health column called Creature Comforts, which can still be found on MSNBC.com